I am delighted this Canadian series has been picked up for a second season, as I thoroughly enjoyed the first. Yes, it is another police procedural drama, but with a major twist. At the beginning of each episode, we are introduced to both the killer and the victim of each week’s homicide. So we know the who, but the important bit is the why. Two very accomplished detectives slowly dig into the case, seeking to unearth the hidden truth, part of which the audience knows already. It’s as though the script writers have taken the viewer into their confidence, giving them a unique vantage point from which to watch the action while withholding a crucial piece of information: the motive.

The show is unlike anything else on television and I find myself completely drawn into each story line while getting better acquainted with the main characters. Detective Angie Flynn (Kristin Lehman) reminds me strongly of Uma Thurman in Kill Bill, but here she’s a world-weary cop instead of an assassin hell bent on vengeance. Lauren Holly is terrific as the sarcastic medical examiner Dr. Betty Rogers and Louis Ferreira, whom you might remember as Col. Young in Stargate-Universe, beautifully underplays the suave Detective Vega. I like the opposing qualities of the detectives’ partnership, how they approach things from totally different angles and often see things the other missed. Together they make an amazing team with a tremendous knack for making the suspect relax, thinking the cops don’t see anything amiss in their story. They play it so cool and casual on the surface, but underneath there are two acutely perceptive minds like steel traps, just waiting for the killer to make a mistake. I’d hate to play poker against these two! – BETHANY

For more on this fascinating procedural, visit the Internet Movie Database

Detectives Vega and Flynn on the job.  Although Vega’s shirt isn’t wrinkled, doesn’t he look like he just rolled out of bed?  Slightly rumpled.

Dr. Betty Rogers (Lauren Holly) and Detective Lucas.  ‘Hey Doc?  This corpse isn’t going to explode, is it?  Because I can’t help but notice you have a face shield and I don’t.’

Detective Flynn doing what she does best.  Asking questions.

Wow, you know she means business when she has two pairs of glasses! 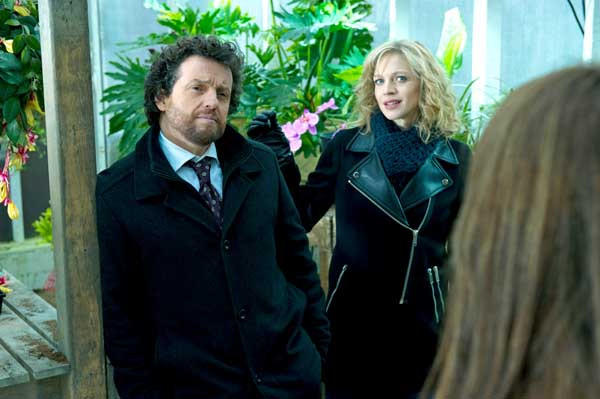 Detectives Flynn and Vega always put people at ease, speaking with a pleasant smile but noticing every tiny detail and possible discrepancy.