I went to see the latest 007 movie in the theater back in October and was so ambivalent about it, I have only just gotten around to reviewing it.  My blasé attitude and extremely uncharacteristic procrastination should speak volumes.  It’s not that Spectre is a bad movie, it is a perfectly respectable spy thriller containing all the requisite components.  But any Bond movie would have suffered in the unenviable position of following Skyfall.  The producers definitely knew this and nearly killed themselves trying making Spectre even more epic, more sweeping, with bigger explosions, more mayhem, Bond hooking up with not just one hot woman but two!, many, many action sequences and even going so far as to ostensibly connect all the previous Daniel Craig Bond films.  But despite this agenda, one car chase seemed more like a leisurely drive and in one memorable scene, Bond actually walks out on the hot girl before things get serious!

I should say I was biased against this film from the start, simply because they had offed Judi Dench‘s M (boo!) and replaced her with Ralph Fiennes.  He’s a perfectly good actor, but I loved Judy Dench as M so much that it made me a trifle wroth.  In fairness, there were quite a few parts of the movie I did like quite a bit.  The opening sequence during Mexico’s Day of the Dead was fantastic, for the costumes if nothing else.  It was a visual extravaganza and the cinematography and staging were fabulous.  I noticed in the credits a bit of it is referred to as ‘helicopter ballet’, which I thought was extremely apropos.  Of course, in this day and age it beggars the imagination to believe if a helicopter is going wacko above a huge plaza filled with revelers that NOT ONE OF THEM whipped out a smartphone and started filming the drama unfolding in the sky.

My favorite scenes in the movie were where Bond interrogates a mouse, which was extremely funny and spot on for the franchise, and also when James is driving another 00 agent’s car and the poor guy is portrayed as an extreme sad sack by means of his vehicle’s accoutrements  (to much hilarity, of course), although we never meet him in person.  Léa Seydoux was absolutely lovely as Dr. Madeleine Swann and it was kind of cool, if an unnecessary detour in the plot, to have Bond seduce an older woman, beautifully played by Monica Bellucci.  Christoph Waltz naturally delivered a great performance and it was nice to get a glimpse of Moneypenny’s everyday life (Naomie Harris).  But there were just way to many instances of eye-roll induced action sequences due to the extreme improbability, if not downright impossibility of such things actually happening.  Not that James Bond movies have ever been known for their realistic plots and stunts (Moonraker, I’m looking at you!), but some have been more believable than others.  All in all, I felt this was a very anemic Bond movie that was just trying way too hard and I sum it up with an apathetic meh!  – BETHANY

For more on Daniel Craig’s latest romp as the famous spy, visit the Internet Movie Database 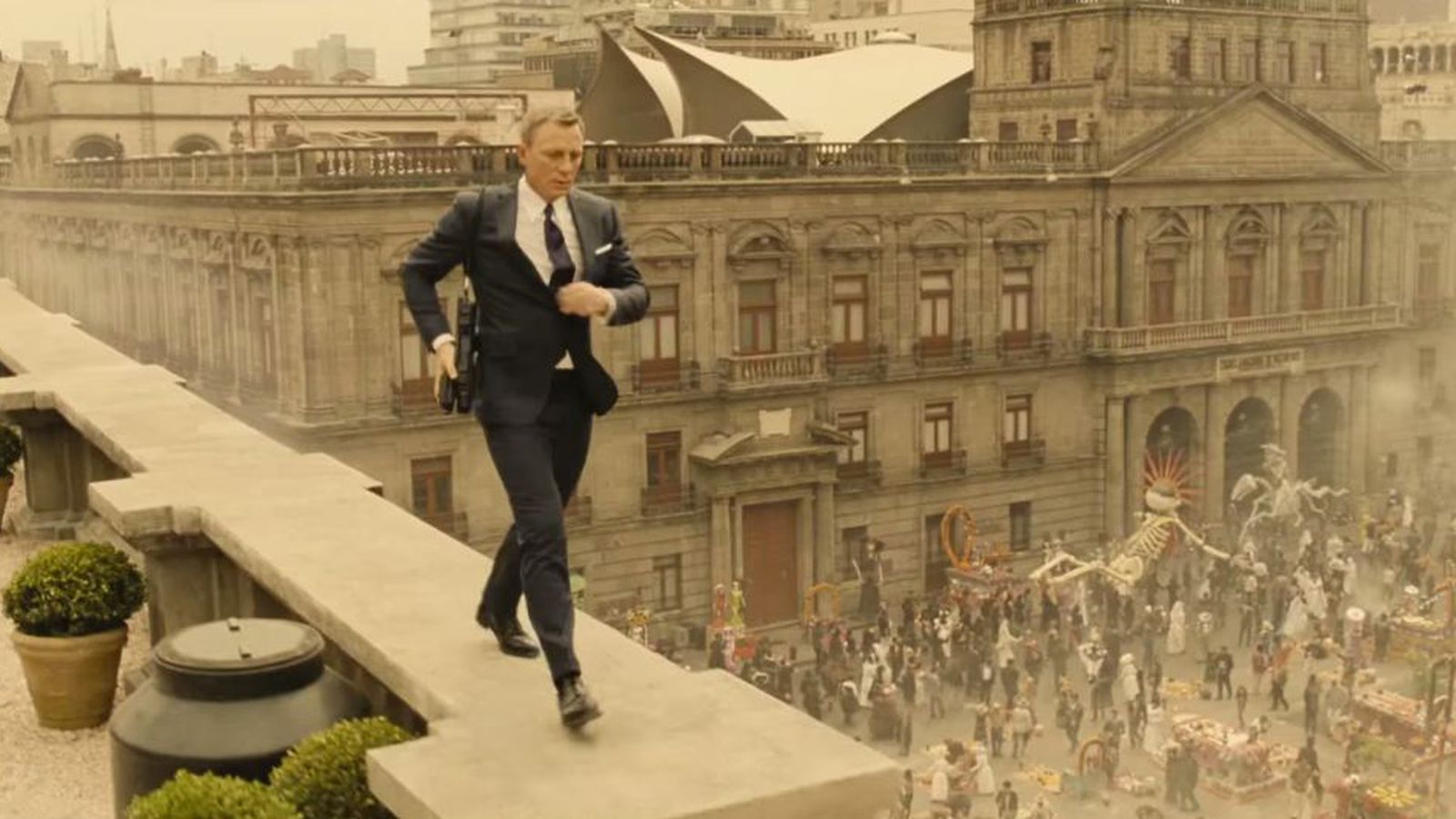 Bond takes a stroll during the Day of the Dead festival.

Some of the fantastic costumes and set pieces from the sequence:

Oh James, did you crash yet another moving vehicle? 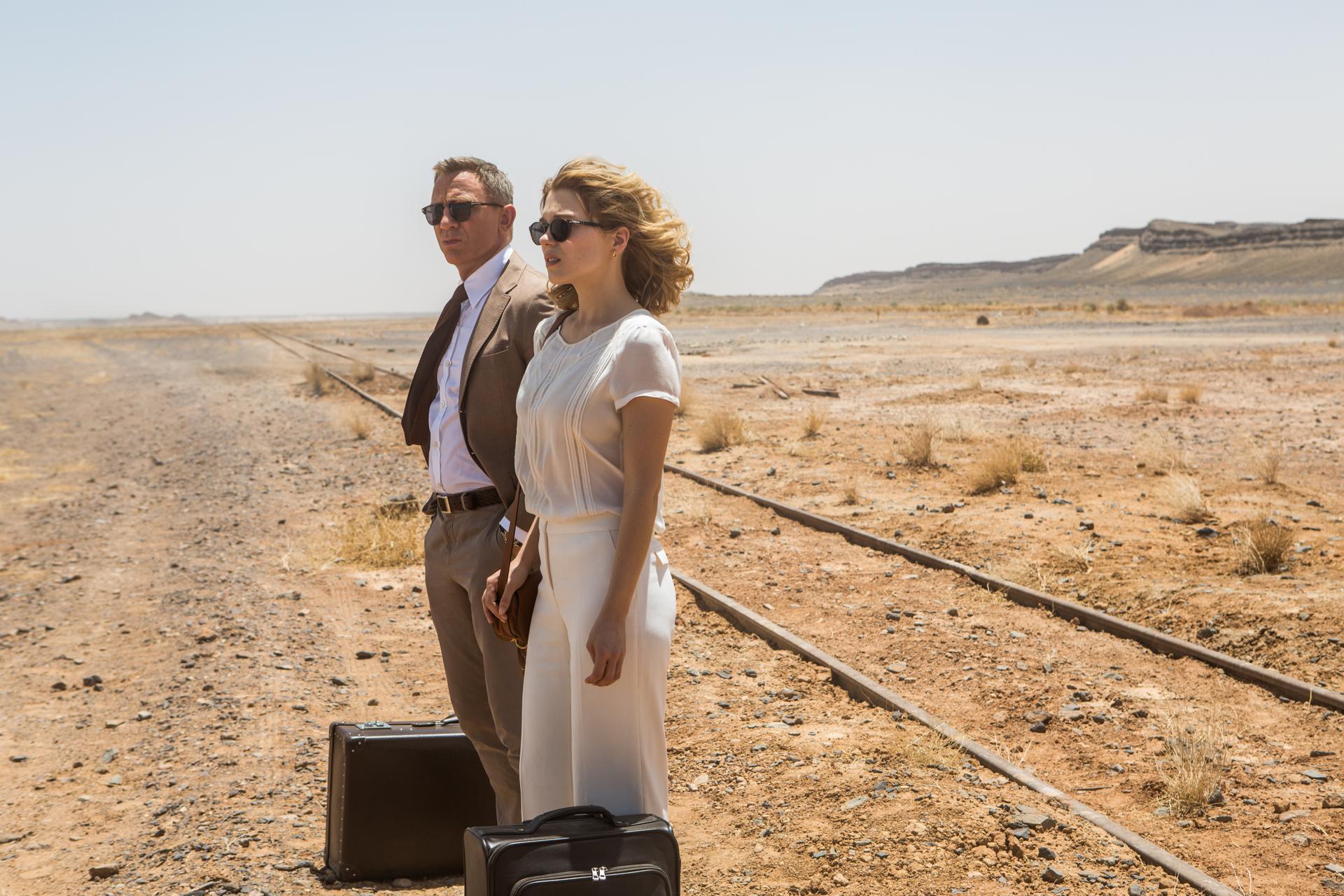 This looks like the least promising railroad stop ever.

Nice dress, Dr. Swann (Léa Seydoux).  Despite the fact we saw you get on that train in a different outfit with no luggage to speak of.

The new M (Ralph Fiennes) faces off with the unctuous C (Andrew Scott).

Here’s all you really need for a Bond movie:

And Boys with Toys.